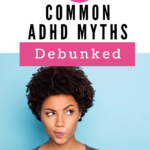 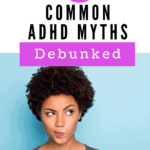 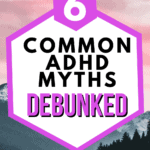 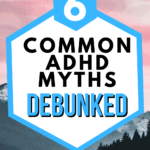 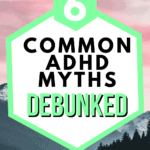 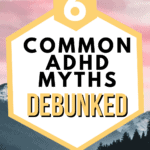 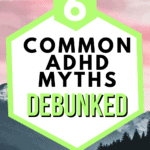 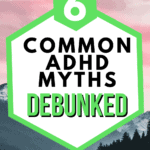 Unfortunately, misinformation has been circulating about ADHD. These ADHD myths are causing harm to many people. Especially women, we are more likely to hear and believe these untruths. Then, we remain undiagnosed and untreated because of them. So, I’m going to shed some light on the biggest myths about ADHD.

1) The myth of the ADHD myth (Does it even exist?)

Yes, some people think that ADHD doesn’t actually exist. The reasoning is usually backed by a belief that it is manufactured by the drug companies to sell more meds, or it is an excuse for lazy people to explain their behavior.

The reason I was fed growing up is that it is a way to turn young children into medicated sheep. Especially minority children and, more specifically, minority males.

Thing is, statistically, minorities are less likely to be formally diagnosed than others.

As for the other excuses, well, brain scans have proven its existence. Yup, can’t really argue with that. Since it is a neurological disorder, it is a matter of biology and brain formation. It’s literally in your DNA and can be inherited. In your face, neurotypical naysayers.

Ugh, honestly, people who say this are just trolls. I mean, they can’t possibly believe that people want to struggle in everything that they do, right? These people think you can fix everything by trying harder. I challenge them to think of it like this… You’re a human being, right?

(I hope you answered yes, or it’s a little weird that you’re reading this, but hey maybe you’re an alien with ADHD and who am I to judge… that took a turn… there’s my atypical brain doing its thing again. Back to topic…)

As a human, you have certain physical limitations correct? Well, I’d like you to go outside and fly to the roof of your house. Don’t tell me that’s physically impossible! All you have to do is try harder! 🤣🤣 Sorry, I couldn’t even write that with a straight face. Yet, that’s how ridiculous people sound when they tell a person with ADHD to try harder. Their brain doesn’t work that way, so they physically can’t, ya morons!

3) Hyperactivity is a requirement

Looking back on my undiagnosed and misinformed life, this one makes me cringe. I spent so much time in the past telling myself I didn’t have ADHD because I wasn’t hyper, like at all. I’m one of the most laid back, le sez faire people you’ll ever meet.

My oldest and youngest daughters have never depleting energizer batteries strapped to their backs. My middle daughter and I get sleepy just watching them…

Well, ADHD is a spectrum disorder.

It can present itself in so many different ways and combinations that no single symptom is required for diagnosis except the presence of symptoms in childhood. So yes, you can lack boundless energy and still have ADHD.

This is the only one of the ADHD myths grounded in some truth. There is a tiny percentage of children who seemingly outgrow ADHD. As for the rest of us, we’re stuck with it, but the symptoms do change over time.

Many adults don’t exhibit as many signs of hyperactivity as they age because they’ve learned to channel it into other things. Also, to be blunt, they’re getting older, and their bodies are slowing down.

So while symptoms may change or even diminish as you age…

They never entirely go away because it’s about your brain composition, not your will power.

Sorry but I’m about to repeat myself right quick… ADHD is a neurological disorder! You are born with ADHD, and you cannot catch it, learn it, or be forced to acquire it.

No amount of excellent parenting is going to prevent it. The opposite is also true. My parenting style has nothing to do with my kids having ADHD.

The fact that I have ADHD (and most likely, my husband too) is the driving factor in them having it. They inherited it from me.

Bad parenting can cause a whole host of mental health issues in children and adults, but ADHD isn’t one of them. So stop blaming the parents for everything people. They’re doing the best they can just like the rest of us!

6) You’ll get addicted to your meds

Meds were my biggest fear when I was going through my oldest daughter’s ADHD journey. Everyone I loved and trusted was dead set against her taking medication to control her ADHD. They had me convinced it was unnecessary and harmful to her.

I believed medicating meant leading her toward a dark path of substance abuse and failure. I wish I had never listened to them.

They’re idiots (not really I love you guys, but you really had no clue what you were talking about). I can see why people might think the meds lead to addiction, but let’s reframe that thinking right quick.

If you have type 1 diabetes, you are required to take insulin every day for the rest of your life or risk death. Does that mean you’re addicted to insulin? No?

While I realize ADHD is not life-threatening like diabetes, it can be threatening to quality of life. So, just like you wouldn’t deny a diabetic their medication, you shouldn’t deny someone with ADHD theirs.

My daughter taking the medicine she needs likely prevented a downward spiral into addiction and self-medicating. The exact opposite of what I let my well-meaning confidants convince me of years ago.

I wanted to add this one as a bonus because it actually deserves an article to itself. One of these biggest and possibly most harmful ADHD myths is that it is over-diagnosed.

The notion that ADHD is over-diagnosed is insane!

If anything, it is underdiagnosed in those who need it the most…

Minorities and women are traditionally under-diagnosed and frequently misdiagnosed.

Women are likely to go undiagnosed/misdiagnosed due to the similarity in symptoms with anxiety and depression. They are also less likely to exhibit symptoms of hyperactivity, especially as they get older, and the signs of inattention can easily be missed.

Minorities are a whole other can of worms. Many still don’t feel the need to seek out help for mental health issues in the first place.

They instead turn to religion. Leaving many undiagnosed because they never seek testing or treatment.

The other cause of underdiagnosis in minorities is the dismissive attitude in our society of the “bad behaviors” among minority groups.

Example: A black boy that interrupts the teacher is labeled as a trouble maker and sent to the principal. While his Caucasian counterpart must be acting out because of something happening to or around him. His behavior is investigated, and a source found. While the other child is punished for actions, he neither understands or can control…

Now that you are armed with more accurate information, please correct the myths the next time you hear them.

It is just as harmful to keep silent as it is to tell a lie in the first place.

I trust that you will do your best to advocate for yourself and your children. Feel free to share this list on social media and spread the word. The more we educate neurotypicals, the easier it will be for us all to happily coexist. Some may even join the cause! And let’s not forget the others like us.

Some haven’t found their way to a diagnosis yet, and that may be because they believe the myths.

So, do your part to get the information in front of them and help them gain control of their life or their child’s life. Remember, you’re essential, and you can help others.

“Be the change you want to see in the world!”

P.S. Pin this post for future reference… Or to show the next neurotypical naysayer you encounter 👍🏽

This post may contain affiliate links. The ADHD Mommy is a participant in the Amazon Services Associates Program, an affiliate advertising program designed to provide a means for sites to earn advertising fees by advertising and linking to amazon.com. Read Full Privacy Policy here.