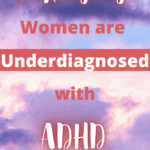 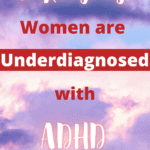 Women are largely underdiagnosed and suffering in silence because of it. Many factors go into this problem including misdiagnosis, misinformation, and more. Maybe you’ve been called overly sensitive, diagnosed with anxiety and depression, or just felt like you’re not living up to your potential.

Here are the top 6 reasons women are left with undiagnosed ADHD:

Many women with undiagnosed ADHD also suffer from an anxiety disorder. In medical terms, it’s called comorbidity. I know that word sounds A LOT like with death, but it’s nothing so sinister. It actually means that you have both disorders at the same time. This is extremely common when talking about mental health. But I digress…

Anxiety in women with ADHD is usually identified in late teens early 20s around the time they enter college and/or start a family. This is because the coping mechanisms that they used throughout their younger years suddenly begin to fail. It’s really no joke when they tell you everything is about to change when you graduate high school. Young women become overwhelmed with the changes and start displaying signs of anxiety. If they seek help for this new development, they are likely diagnosed and sent on their way.

Now these women armed with a diagnosis and a plan to overcome with medication and therapy. Go back out into the world and fail again and again. Nothing seems to be able to stop that pesky anxiety or the feeling of being completely overwhelmed most of the time. Which leads to another common comorbidity… Depression

Depression is anxiety’s best friend. I have rarely heard of someone who’s been diagnosed with one and not the other. It also turns ADHD in women into a triple threat when added to the equation. I’m on that list with the trusty trio occupying my brain. Funny thing, I actually had the depression before the anxiety. I got overwhelmed and blamed myself, deeming it a character flaw. I, like many other women with undiagnosed ADHD, internalized the problems I was having. I knew something was wrong with me, but I didn’t know what. So I sought help and was quickly labeled with depression.

Nobody bothered to look further than the most obvious explanation.

So I, like many others, went back out into the world armed with a diagnosis, meds, therapy, and a plan… but I kept failing. I failed until they called it depression AND anxiety. Then I failed some more, and they called it adjustment disorder (I really hate this one). When I failed again, they threw around terms like bipolar disorder. Yeah… it went that far…

but no one… not a single person… thought of ADHD. I’m a woman, so it must be some sort of hormonal/chemical imbalance in my brain, right? Which leads me to…

Yeah, I cringed just writing that, but stick with me here. I do not agree with that misogynistic statement. I’m merely shedding some light on how society views us. You know, delicate and emotionally unstable. We couldn’t possibly handle life, so it’s no wonder we’re so overwhelmed all the time. I mean come on ladies… we cry when we’re sad, happy, and angry. A tear for every occasion. So, I’m not really surprised we’re deemed “emotional,” but that doesn’t mean we have no control over it.

Indeed, the majority of us women have control of our emotions to the fullest extent humanly possible. We know when it’s appropriate to emote and do so accordingly. Even those of us with mental health issues and/or ADHD. Yet, when we are undiagnosed, sometimes our emotions can get away from us.

When this happens to men, ADHD is one of the first things asked because men aren’t “emotional.” They don’t ask the same of women because they assume emotional outbursts are standard for us 🤦🏽‍♀️. Ugh, stupid patriarchal society… and don’t get me started on the damage done to men by society imposing this emotionless stereotype… Nope… I’ll save that rant for another day… Which brings me to…

To compound the “emotion problem,” we have the misinformation surrounding it. Like… Who was the crazy person that decided women could work somewhere other than their home? That’s the problem, right? We brought all our period and estrogen fueled emotions into the “real world,” and we couldn’t cope.

WRONG! (So wrong for so many reasons that I don’t have the time to list here… there’s that darn patriarchal society again *shakes fist*)

That doesn’t explain all the women who choose to stay home and are still overwhelmed and coping poorly. We know when it’s not normal for us to be extra sensitive or overly emotional. Yet, society will tell us it’s normal.

There’s also a host of myths about ADHD itself that causes many women to ignore the signs they see in themselves. Women are more likely to hear these myths and believe them than men.

They include but aren’t limited to:

Read more about these myths and how they could be holding you back at ADHD Myths Debunked. The last myth is a big one for us women…

Looking back on my own misinformed life, this one played a big part. I spent so much time in the past telling myself I didn’t have ADHD because I wasn’t hyper… like at all. I’m one of the most laid back, devil may care people you’ll ever meet. My oldest and youngest daughters have never-ending energizer batteries strapped to their backs. So much so, I get exhausted just being around them…

Well, ADHD happens to be a spectrum disorder. It can present itself in so many different ways and combinations that no single symptom is required for diagnosis except the presence of symptoms in childhood. Find out more at What is ADHD?

Most women, like myself, lack symptoms of hyperactivity. We believe ADHD only presents itself like it does in two of my children. So we never really look at our own lives and ask the question, do I have it too? We simply chalk our problems up to character flaws and unsuccessfully battle the depression and anxiety that ensues. We, as women, need to begin recognizing that excessive inattention is also a red flag for ADHD.

Also fueled by myths, stigmatization can keep many people from seeking help for ADHD symptoms. This is especially true for women and people of color. There is a fear of being labeled with any disorder, including ADHD. When you already have so many limitations set on you in life, you don’t want to welcome another. ADHD can feel like another limitation or another way you’re different.

It doesn’t help that there are myths that perpetuate stereotypes of people with ADHD as being lazy, unreliable, liars, and drug addicts. There’s this assumption that those of us diagnosed were actively seeking an excuse to continue poor and destructive behaviors or to get mind-altering drugs legally.

When hit with these things when you’re already feeling down… It’s no wonder many of us turn away from the idea of seeking help. I did for years, partially for this reason… Don’t continue to live in suffering because of fear. Trust me, it’s not worth it.

As women we are immensely hard on ourselves. You can likely read this entire article and still think that it’s your fault you’re struggling. I’m here to tell you that’s not true and to urge you to take a harder look at your life. Get more information here at 12 Signs You Have Adult ADHD and Symptoms of ADHD in Women. Knowing the truth could change your life in amazing ways!

Please Note: This list or any other is not a substitute for evaluation by a mental health professional. If you believe you or someone you love may have ADHD, then contact your healthcare provider today. There is no substitute for an accurate diagnosis. Check these resources to find a provider near you: Clinics List.

With that said, I hope this has helped you understand your struggle. You’re not alone in this. Keep pushing through, keep being your awesome self, and keep believing that things will get better!

0
Spread the love
Previous Post: « 20 Positive Quotes for When You Feel Overwhelmed
Next Post: My Top 5 ADHD Books for Women »