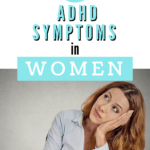 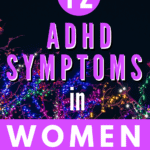 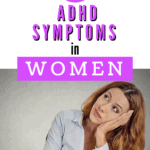 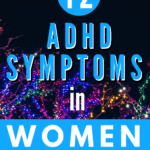 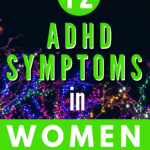 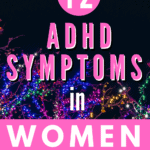 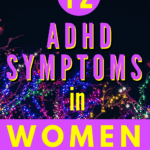 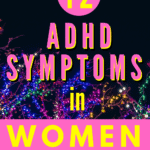 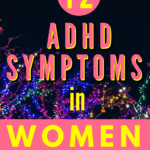 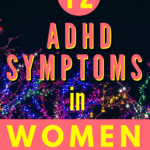 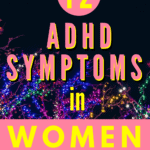 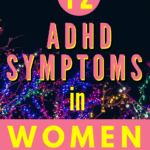 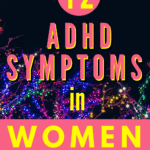 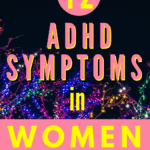 ADHD symptoms in women look different than in men. A vast majority of women do not exhibit signs and symptoms of hyperactivity. Instead, we tend to lean towards inattentiveness. Learn more about the types of ADHD in What is ADHD?

We are also very emotional and self-critical creatures by nature. When we have problems, we are likely to internalize them. This often leads to the development of anxiety and depression, along with our ADHD. I made a previous list, Signs of Adult ADHD.

This one is just for us ladies…

Are you one of those people who can never figure out how long something will take? You may be suffering from time blindness. I always underestimate the amount of time it will take for me to complete a task.

I also can’t keep track of time without an outside source. Some people can tell you exactly when 30 minutes have passed. For us, we have absolutely no clue. 15 minutes can seem like an hour or vice versa. If this is you, timers and alarms are your best friends.

2. Loss of Everything… Daily… Hourly… Sometimes in seconds 🤦🏽‍♀️

Can’t find your phone that you were on 5 seconds ago? Don’t remember where you sat the permission slip after you signed it? Maybe your keys got up and walked away again?

Honestly, if it isn’t attached to your body, you have no idea where it is.

If this happens to you daily, there’s a good chance you have ADHD. This also applies to being forgetful. Like I just forgot what I was going to write after that because I made the mistake of looking at the dog when she jumped up next to me…

This is why we need to work in an area free of distractions!

Okay, this may seem like a thing anyone would feel. I can’t honestly say that neurotypicals don’t dread specific tasks… But as one of the ADHD symptoms in women, it is on a whole other level.

The thought of certain tasks leaves us paralyzed.

There’s no amount of encouragement or incentive that can get us to do the things we dread. In fact, when we are forced into action on said task… there’s a chance we’ll have a panic attack before we even start.

I have gone into a full-on meltdown over paperwork before. Especially when I knew it was going to take a lot of time and mental energy. I’ve turned in work literally stained with my tears.

ADHD symptoms in women can make for bad housewives. It isn’t that you don’t make attempts to keep your house, workspace, or car clean, because you definitely clean them. Yet, somehow, they never stay clean for long, and you’re not sure how it keeps happening. You’ve tried every organizational system you can think of, but nothing sticks.

Instead, you deal with a frustrated spouse or parent who complains about your messiness. Which usually doesn’t help the situation, and cleaning becomes one of the things that paralyze you to think about.

Note: this one doesn’t count if the messy area gets messed up by your kids or someone else who lives with you. Try to think of a space that’s all yours and apply it to that.

Many of us do or say things without thinking first. Sometimes these things can risk our health and safety.

Many young women with ADHD engage in risky impulsive behavior such as unprotected sex, binge drinking, drug use, and more.

At the time of action, there is no thought to the consequences. I fell prey to some of these behaviors as a young woman myself, and part of me knew what I was doing wasn’t safe, but it was fun, so I did it anyway. Then beat myself up about it later…

Sometimes, impulse issues are more subtle. You blurt out the first thing that comes into your mind, you buy stuff you don’t really need, or you choose to play a game instead of working. All these things are signs of lacking impulse control.

6. Having a need, a need for… control

You thought I was going to speed, didn’t you? Well, you’re wrong, and you shouldn’t finish other people’s sentences. That’s highlighting your impulse control issues b-t-dubs… Anywho, moving right along…

What I’m talking about here is being a control freak.

This is one of the more surprising ADHD symptoms in women. It stems from spending your life learning to compensate for your ADHD. That meant you developed a system that helped you cope with adulting. You have to be in control of that system to maintain order.

If you let someone else take the wheel → they’ll likely do it wrong → their mess up = your entire day sucks!

Sound about right? Yeah, thought so…

It’s okay, we are justified in our frustration with others ruining our plans. They don’t understand the sheer amount of energy and will power it took to create the plan in the first place. Nor the near impossibility of you being able to detour on the fly.

Actually, I should probably call this one getting stuck on things. It’s that illogical train of thought that you just can’t shake. It’s having a bad experience and not being able to see anything but the bad part of that situation.

Even though you know the overall situation wasn’t bad, you can’t seem to focus on the logic that would steer your mind there.

I think if you’ve experienced this, you know exactly what I’m saying right now. If you haven’t, you’re completely lost and should probably just move on to number eight.

I hate this one because it is so true for me, but I don’t like to admit. I don’t deal with emotions well.

One of the most common symptoms of ADHD in women is emotional dysregulation.

We’ve all learned to cope with it in different ways. Some women internalize their emotions, turning all the anger and frustration towards themselves. Many women let their emotions control them instead of being the one in control of their feelings. They’re the ones who seem to be on a perpetual PMS rollercoaster.

Then there are women like me who choose the most unhealthy route. Avoidance… I spent a good chunk of my adult life, shutting out emotions. Good or bad, I wanted nothing to do with them. I knew I couldn’t control them, so I pretended they didn’t exist, and it made my life 1000 times harder than it needed to be. If you’re doing this one, please stop immediately, it’s not worth it.

Can’t stop yourself from noticing the slightest things you’ve done wrong and pointing them out to everyone who will listen. Yup, you’re using perfectionism as an excuse not to do something.

If you can’t do it perfectly, then why do it at all right? You tried it, it didn’t work, and you write it off as impossible. Everyone will understand because it simply can’t be done.

You’re the one that never lets anyone see what you did. That used to be me, I noticed all the smallest imperfections and decided it wasn’t fit for human consumption. Then I quit or trashed it. Still, it was an excuse not to keep trying when things got hard.

Like answering the question without hearing the whole thing first. How about turning in a paper about the north and south’s role in the civil war instead of picking one? Yes, that was oddly specific. That’s because it actually happened. It’s one of the many careless mistakes I’ve made in the past that make me cringe.

Seriously, how did I miss the or in that question? So much wasted time… I bet you’ve got a bunch of similar facepalm moments yourself… It’s okay you’re among friends now… We understand your pain.

You’d do anything to avoid them. Likely because your symptoms have caused you embarrassment in the past. Making you doubt your ability to act appropriately in social situations. The thought of new people gives you a full-on anxiety attack some times. And large groups of unknowns are a definite no go.

It’s also possible that your social anxiety is limited to large groups only. Maybe it’s less about past awkwardness and more about sensory overload. We ADHDers tend to struggle with loud, crowded places.

Remember, our brains take in too much information. When faced with a sensory assault like a party, we tend to get overwhelmed.

So it’s completely understandable that you’d trade the rager for a small game night anytime.

You’re possibly still in denial that you even have ADHD. Doesn’t everyone have these kinds of problems? Don’t they usually just push through them and conquer them? You’re telling yourself a story like…

“I’m not strong enough to overcome these flaws. If I try harder, I’ll be okay. I don’t have all these things, so I don’t have ADHD. I’m just a useless person.”

If any of this sounds like you… I need you to get yourself tested.

This is one of the more harmful symptoms of ADHD in women. It keeps us feeling like it’s all our fault. I used to believe all the things on this list were my fault too. I thought I just wasn’t good enough to overcome them.

Turns out, I didn’t have the tools to get past them. That’s because I didn’t know I had a treatable disorder, not character flaws. You’re most likely not the horrible person you think you are… Get help!

I made this the bonus symptom because it is the best thing about having ADHD. You may think you’ve been saddled with all these bad traits, but there are some great ones too. You can read about them at 5 ADHD Superpowers.

Hyperfocus is the opposite of our usual inattention. It is the ability to completely and utterly block out the rest of the world and attend to one thing.

It’s why people sometimes think their kid has been misdiagnosed when they see them focused on something for hours at a time. If we like something or we’re in a crisis, we can zero in on that one thing. So reading this whole post and considering each point carefully could mean you just hyperfocused on it.

A word of caution… This list or any other list is not a substitute for evaluation by a mental health professional. If you believe you or someone you love may have ADHD, then contact your healthcare provider today. There is no substitute for an accurate diagnosis. Check these resources to find a provider near you: Clinics List. With that said, I hope this list helped you understand your mind a little better.

Keep being your awesome self!

4+
Spread the love
Previous Post: « 6 Common ADHD Myths Debunked
Next Post: 6 Things to do at Home with Your Teen Daughter » 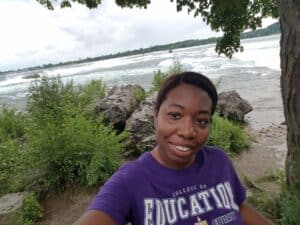 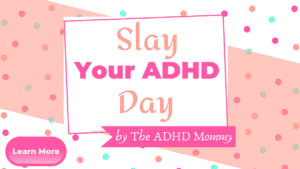