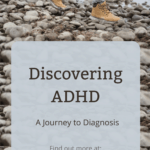 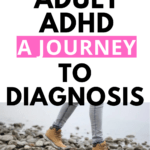 This is the story of how I was finally diagnosed with Adult ADHD (inattentive type). I grew up believing that ADHD was simply something made up by drug companies. It wasn’t a real disorder, it was a way of turning active and free-spirited children into sheep. Aren’t hyper/inattentive children the norm? Especially little boys, who seem to make up the majority of children with the label. I was told it was a childhood ailment that you grew out of when you reached adulthood. Which solidified my belief that it was a way for modern medicine to fix the things adults didn’t like about children. I was in for a massive shift in my thinking as my oldest daughter entered upper-elementary school.

It’s the end of 3rd grade for my oldest daughter. The school is holding its year-end awards ceremony. I’m sitting proudly in a crowd of parents, all eager to watch our children get awarded for all their hard work throughout the year. My eyes scan the neat rows of seated children in search of my own. I spot her in the back of her class. She’s hard to miss. While all the other children are sitting crisscross, hands in their lap, eyes upfront on the principal… My child is crawling behind everyone focused on something on the floor. I shake my head slightly mortified my 9-year-old child is not only crawling around but utterly oblivious to what is going on around her.

Still in Disbelief… it’s not ADHD

I wish I could say that was the moment I believed ADHD was real… but it wasn’t. That year, and the rest of elementary school, my child was on the A/B honor roll. Her teachers loved her and she had plenty of friends. The term ADHD had come up a couple of times in doctor’s appointments, and teachers hinted at it, but they’re not allowed to say they suspect it outright. I ignored the signs. She’s just a free spirit. Isn’t it better that she doesn’t grow up too fast? These sentiments were echoed by my parents and other family members. We all figured she’d grow out of it. It wasn’t until middle school that it really hit me that she wasn’t going to grow out of it. Her behavior was no longer developmentally appropriate, and it was beginning to show in her grades and social skills.

I finally gave in and had her tested in 6th grade. The main reason I broke was that she came to me and said, “Mommy, I think there’s something wrong with me. I’m not like the other kids, everything is harder for me.” Since then, she has been on medication and sees a counselor to help her learn the skills she needs to stay productive. It’s worked out wonderfully for her in part because she’s a combination type. In fact, her hyperactivity and impulsivity tested a little higher than her inattention. It made her symptoms noticeable to the outside world. You could guess just by watching her for a short time. For people like me, it’s not that easy to see.

Do You Have ADHD?

After years of believing that I was simply plagued by persistent anxiety and depression, I started to notice little things as my daughter went through the process of testing. Counseling was getting me nowhere, even with medications that were supposed to help me feel “normal.” I started to doubt my diagnosis, myself, and the experts that only told me to try harder. 5 things stood out to me during this time:

My answer to all of these was a resounding YES! It had all been the bane of my existence for as long as I could remember. Yet, I still wasn’t convinced it meant I had adult ADHD. I knew something wasn’t quite right, but it took a very long time for me to break through the denial and self-doubt to find clarity.

That’s when I mention to my counselor for the first time that I briefly toyed with the idea I might have adult ADHD. She immediately agreed that it was a possibility and explained that it was a spectrum disorder. We discussed it at length in a few sessions but the counselor I was seeing at the time was not licensed to diagnose. So I was referred to my PCM. Unfortunately, by that time we were transitioning to PCS (permanent change of station). I couldn’t complete testing before moving to my husband’s new duty station. The notion was put on hold yet again.

Finally… the Answer is Adult ADHD

By this point, I began to read and watch everything I could on Adult ADHD. I took so many online tests I lost count. I had a new obsession, and I was going to get to the bottom of this mystery. As soon as we were settled in our new town and had been assigned new doctors, I began asking for the testing. It took a month to find a place that even knew how to test Adults that hadn’t been tested or diagnosed in childhood. It then took an additional three more months to finally complete the testing and be told that I did have ADHD with a primarily inattentive type.

I was glad to finally have the answer as to what had caused me to struggle throughout my life, but it came as I was approaching middle age. I couldn’t help thinking about how much of my life was wasted, not knowing. All the opportunities that I’d lost, all the dreams unfulfilled. If I had known sooner would things have been better for me? Easier? I’ll never know the answer to that question, but I know that everything happens for a reason. If my story was different I may not have decided to create this site, or had my children, or met my husband, and the list goes on. I’m not going to waste any more time dwelling on what could’ve been. Instead, I’m going others, so they don’t have to wonder, What If…?

0
Spread the love
Next Post: Why I Love Mondays… and You Should Too »