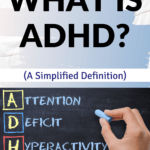 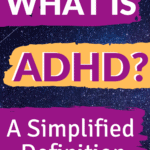 I was once like you. Searching for answers that made sense for what was happening inside my daughter’s mind, and later inside my own. I read every definition I could find on what exactly ADHD is. The majority of the answers I found were either vague or really technical. It was frustrating that even coming from a slight medical background, I couldn’t really tell you what it meant to have ADHD. ADHD stands for Attention Deficit Hyperactivity Disorder… That alone is a mouthful and pretty much tells us nothing about what it actually is. So, I’m going to break it down into pieces for you.

Here is my Simplified ADHD Description:

This seems like the easy part of the explanation, right? A deficit is a shortage. It means you are lacking in something, or you have less than someone else. An attention deficit would then suggest you have a shortage of attention or less attention than someone else. That makes sense; those darn ADHD kids can’t pay attention to save their lives, right? Wrong! Yep, I made that obvious mistake too. In fact, the opposite is usually true. It’s not that the ADHD brain can’t pay attention; instead, it pays TOO MUCH ATTENTION.

Our minds take in more information than the average brain making it harder for us to focus on one thing. I had a co-worker who called it SOS or Shiny Object Syndrome. Every time I tried to focus on something, the slightest movement or shiny object would catch my attention. This was because I didn’t have the natural ability to filter information. Oooohhh SHINY!!

This is also true for thoughts and is the main reason many women are diagnosed with anxiety instead of ADHD. If you’ve ever taken a mental health survey, you know that one of the questions they always ask is if you’ve had racing thoughts. Well, if you have ADHD, you’ve likely had racing thoughts for as long as you can remember. You’re always thinking 20(or 100) things at once, and half the time they’re not even related to each other. This makes it hard to grab one thought and focus only it. It can also make you a worrier because you can think of infinite what-if scenarios in a matter of seconds… It’s not a deficit; it’s a surplus. They really should change the name to ASHD and stop confusing everyone.

Hyperactivity (Activity level that is inappropriate to the setting)

This one comes in two parts, but at least the name is accurate. The prefix “hyper” means in excess or too much. So hyperactivity is basically just too much activity. This overactivity is sometimes what leads to an ADHD diagnosis, and is seen more often in boys than in girls. If you have hyperactivity, it feels like your batteries are always fully charged. Sitting still or standing in line leaves you feeling like you’re going to burst right out of your skin. You fidget, squirm, or talk out of turn. Pretty much anything to keep from being still and quiet. When I look back, I marvel at the fact I didn’t see the signs in my daughter sooner. She is living proof that you don’t have to learn to walk before you run. In fact, in those first months, she couldn’t slow to a walk without falling. She literally had to run to keep her balance. I finally recognized there might be something wrong with her because she couldn’t sit still at an assembly. Hyperactivity is the only highly visible part of ADHD.

The second part of hyperactivity is impulsivity (acting without thinking). This can be a physical act or something more mental/emotional. I believe it is lumped in with hyperactivity because in many ways it almost a symptom of it. When you are in constant motion sometimes your body is doing something before you’re fully aware it’s happening. I have punched people for saying something I didn’t like without even realizing I was doing it until it was done. I’ve also had a lot of trouble with word vomit. I’ve spilled secrets and shouted angry retorts in some of the most inappropriate settings. I still feel embarrassed when I think of some of them. Impulsivity is a relationship and career killer. To me, it is by far the worst part of ADHD.

Now that we’ve deciphered the name, what does it all mean for you or your child? If you remember the 90’s than you might remember when there was a condition called ADD that was separate from ADHD. ADD or Attention Deficit Disorder was used to describe someone that was mainly inattentive. Today, ADD is just one of the 3 types of ADHD. Those 3 types are inattentive, hyperactive/impulsive, and combination. The 3 types can also vary within each person based on the severity/strength of the person’s symptoms. This is why it is considered a spectrum because it is possible for two people to have ADHD but have entirely different symptoms. This is apparent in my own family. My daughter and I both have ADHD. She is a combination type with a high score in hyperactivity/impulsivity. I’m primarily inattentive type with a bit of impulsivity but almost no hyperactivity. Here are the types broken down:

Has trouble focusing and remembering things. These are the people who are often described as absent-minded or daydreamers. They are often mistaken for being rude because they don’t seem to notice their surroundings and often ignore other people. They are usually good at starting projects, but rarely do they complete them with the same motivation. They have difficulty getting and staying organized which often leads to losing items that are important to a task. They’re labeled as procrastinators, flighty, messy, unintelligent, and unreliable. All of which I have been called at some point in my life.

These are the people who seem to be driven by a motor. They are always on the move fidgeting, tapping, walking. They usually enjoy exercise and are good at a sport or other physical activity such as dance. Their mouth is generally moving about as fast as their body. They talk excessively and have trouble waiting their turn to speak. This can lead to them being labeled rude or know-it-alls. If they have information to share, they are often compelled to share it immediately before they forget it and without thinking of its appropriateness. They cut into conversations they weren’t a part of and may take over a task without permission. They can also be inappropriately loud when talking or doing a noisy task. They are often described as talkative, socially awkward, hyper, noisy, and trouble makers. Many of these labels have been used to describe my daughter.

This last type is just as it’s named. A combination of the other two types. This can be any combination of symptoms as long as they almost equally split between the two types. For instance, I have way more inattentive symptoms than hyperactive ones. I only have trouble with impulsive talking and spending. My daughter, however, is the perfect picture of the combination type. She is one of those people where you might think the term ADHD was created to specifically describe her. She can check almost every box in both categories.

What ADHD is Not

Now that you know what ADHD is, let me tell you a bit about what it isn’t. ADHD isn’t caused by external factors such as parenting, lifestyle, or diet. You can’t catch it or develop it because you took drugs or were abused or any other life event. It is a neurological disorder, that means it is how your brain is hardwired to be. It is completely biological and actually can be inherited from a parent(s). A person with ADHD is not neurotypical. I love the term neurotypical, by the way. I first heard it on the show Atypical on Netflix. Since then, it has become my way of describing all the “normal” people in my life. My family is A(DHD)typical and proud of it. Anyway, I got off track there… So Atypical of me 😉. We cannot be classified as having a mental illness, behavior disorder, or a learning disability. Although it is possible to have one or more of those things along with ADHD, they aren’t used to describe ADHD itself. Lastly, this is not a childhood disorder that you outgrow. In fact, more than 50% of those diagnosed as children continue to have some type of symptoms into adulthood.[1]

I know I just gave you a lot of information, and if you are reading this for yourself, you likely skimmed through most of it and read the headlines. That’s okay; it means you’re in the right place. Your Atypical brain is having trouble focusing on all these words because I put all those darn pictures in here to distract you! I should know better, but I couldn’t resist! If this sounds like you… Your next step is to get tested. Contact your healthcare provider and tell them your suspicions today. If you’ve already been diagnosed, then welcome to the fam. Please take a moment to check out some of our other content made for us by us. Wait… I think I stole that from somewhere 😬.

This post may contain affiliate links. The ADHD Mommy is a participant in the Amazon Services Associates Program, an affiliate advertising program designed to provide a means for sites to earn advertising fees by advertising and linking to amazon.com. Read Full Privacy Policy here.

0
Spread the love
Previous Post: « Why I Love Mondays… and You Should Too
Next Post: 10 ADHD Life Hacks You Can Use Now »